The Serbian final gave us everything – excellent teams, great atmosphere and very close fight for the victory until the last game. At the end the strongest team was Kragujevac and they took the big victory in Zlatibor, Serbia, on the altitude of more than 1000 meters, for the second year in a row. Kragujevac will represent their country in the international semi-final in the end of August. With the same amount of points, only three behind the winner, ended Čačak for silver and Kikinda for bronze.

The old and the new champion Kragujevac showed already in the first game they want to secure the title in their hands. In flying water polo they made impressive 434 points and it was clear nobody can come even close to that result. Also Čačak and the home team Čajetina played great and with 327 and 311 points came second and third. On the other hand, a little bit disappointing was Sombor with only 4 points in this game.

The next task – tourist rescuing – was played really quickly due to a lot of lifeguards in teams. Kikinda was the fastest and they caught up with Kragujevac, taking 10 points for the victory. Novi Sad raised from the ashes like a phoenix, coming second, even though they had problems in the sup, while few seconds behind was Kragujevac, still the leading team after the second game.

Water basketball brought 10 points for Kragujevac yet again, proving their great swimming form and calm hand in scoring the barrel, while Čačak and Kikinda were only one second ahead. After the third game, the results were as follows – Kragujevac 26 points, Kikinda 18 points, Čačak 16 points. Sombor with 12 points was close enough to get up from under and involve into the battle for medal.

Unfortunately, it didn´t go that way. Two teams were fabulous in water alka and didn´t allow Kragujevac to go too far ahead. Kikinda made unbelievably 16 points, scoring five alkas to the middle and only one around, 14 points of Čačak is also a great result. The other four teams had 8 (Novi Sad and Kragujevac) and 7 points (Čajetina and Sombor).

One of the highlight of the night was for sure our fifth game – prosciutto and the perfection of the Kragujevac´s player. He touched the prosciutto in incredible exact 21 seconds, beating everybody for more than three seconds. As we expected, the only one who came at least near, was Kikinda, finishing in 24.22, while Čačak with 27.68 took 6 points in that game for the third place.

The last game of the evening, paddle, was still keeping an open possibilities for two teams for come in first. Kragujevac and Kikinda got directly through to the semi-final, while Čačak and Novi Sad fought for the place there with Sombor and Čajetina. Then both of the leading teams lost in the semi-final and it was clear – Kragujevac won the Serbia again. Čačak overtook Kikinda with 15 points in the last game. They finished with the same amount of points, but due to being better in the last game, Čačak won second place. Novi Sad with 12 points in the last game finished on the fourth position, getting ahead even of one of the favorite today, Sombor.

KRAGUJEVAC: ˝We came here to play the games, not to win. Winning is just a side ˝issue˝, the great one. We are professional athletes so we have serious competitions; we compete in European and World championships, so this is really the event where we want to have a good time. In the last game we raised a drama a little bit, but still managed to keep an advantage until the end. We have problems in the paddle, because all of our competitors are very light comparing to others. I have to say that today´s final was much stronger that the one in the last year, especially Kikinda played really strong and was all the time close behind. In the international part we will do everything to play decent and give our best. ˝

ČAČAK: ˝It was not bad, but honestly, we are not happy with the silver medal. We trained a lot, we wanted to win tonight, but we made a mistake in the second game – tourist rescuing and we couldn´t get close again. We expected the maximum amounts of points in this game, because we were really great in Čačak, but as I sad, we made a mistake and it didn´t turn out as we wished for. The next year for sure we will go for a win.˝

KIKINDA: ˝We came to Zlatibor stronger, we changed some players. We have lost the victory in the last game. Otherwise we played good, we are satisfy. We only gathered our team one month ago, we didn´t practice a lot. But we are here, in the final, we are the third best team in Serbia, so we have to be satisfy. We finally overtook Sombor team, which was today unrecognizable. We are happy we proved we are better. Our team will for sure compete next year, stronger, eager on taking the title.˝ 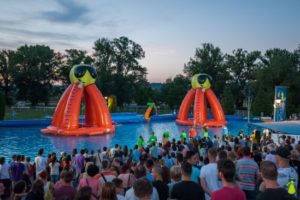 Before the final: Six qualified teams will fight for the victory