Powerful emotions from competitors and crowd in Đakovo brought their home team to Croatian Finals that will be held on August 20th on island Vir. Numerous visitors had a lot of fun on beautiful location-  Đakovo city pools cheering for their favourites on evening filled with positive spirit, great music and friendship in sport entertaining event that managed to connect tradition, fun and skills of competitors.

Four teams competed and presented their skills and strength: Team Promili from Vinkovci, Ekipa za zabavu that was formed by competitors from three countries, Lege s kopike from Osijek and TKTKTKTK from Đakovo.

In first three games Osijek team was leading, but after that team from Đakovo took a lead by scoring most points in Tourist rescuing game. Decisive was game Paddle that brought victory to Đakovo team and place in finals.

Team Đakovo had a rarely seen loud support from their fans that cheered for their team and motivated other spectators for standing ovations.

The statement from Mrs Alisa Moreau from France that is staying in Đakovo with family is maybe the best description of the evening: “I have spent three beautiful days in Đakovo. We are thrilled with this competition; we have never seen something so entertaining. I would like to thank the organizers and congratulate both competitors and spectators for great energy they had shown. I am also thrilled with Đakovo Cathedral and State stud farm Đakovo. I will recommend all my friends in France to come and visit Đakovo.”

Medals to the best were presented by deputy mayor of Đakovo Mr Robert Francem. 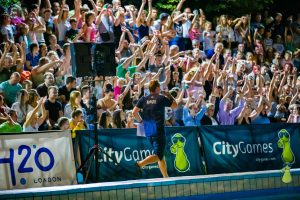