In front of almost 2000 excited and loud spectators City Games, a world-known spectacle, was held in Ajdovščina.

Two hours of continuous ovations showed excitement of supportrs and stands were too small for crowd that constantly cheered and forced competitors to give their best.

Five teams competed in front of excited supporters: Telebajski from Krško, Borci from Ljubljana, Sardele from Kopar, Beluge from Piran and cheerful home team Ajdovščina that had a famous TV star Franko Bajc in their team.

Home team had a surprisingly great start and great tactics. After first four games they were first on scoreboard, but in fifth game – water basketball they performed worse and team Beluga from Piran took first place and confirmed their domination in final game paddle.

Playful and cheerful night in Ajdovščina will be talked about for days among competitors and spectators that loudly cheered whole night.

Standing ovations for Team Đakovo that qualified for Croatian finals 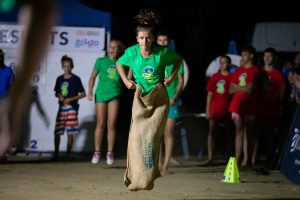