Sport entertaining event, new edition of internationally known Games without boundaries returned to island Pašman after three years with brand new scenography and other numerous surprises.
There was a lot of excitement, both for numerous crowd and both for organizers, Pašman Municipality and Adria Events agency. Organizers put great effort to present to visitors of island Pašman spirit of City Games. In front of more than 1000 spectators, which with their cheering gave additional stimulus to competitors to give their best, six teams, five from Croatia and one, very fun and entertaining from Russia, competed for the gold medal.
Teams competed in modern versions of traditional City Games like wine, flying water polo, prosciutto, water basketball and paddle.
Golden medal went to team Srdele from Dobropoljana that had great start, but in third game prosciutto they slowed down and equalized with other home team Nutilus. But they immediately made their return winning most points in last two games and won competition with 43 points.
Silver medal was won by team Nutilus from Dobropoljana with 31 points and they have shown great swimming and pedalling skils.
Bronze team Garmenjak from Barotula won 28 points by performing great in game paddle and secured great result for the end of the competition.
Team Kalingrad from Russia contributed to great atmosphere and attractiveness of City Games and finished with 26 points won.

Playful and cheerful night in Dobropoljana on Pašman island will be talked about among those who participated City Games and among those who cheered for their fans. We truly hope that we will have a chance to enjoy next year’s edition of Pašman City Games. 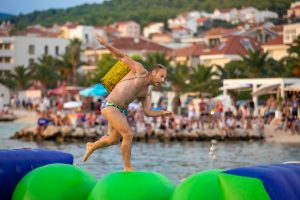 Great atmosphere by the sea in Okrug

Standing ovations for Team Đakovo that qualified for Croatian finals