After the challengers in Koper, Maribor and Ajdovščina it was finally time for the big
Slovenian final of City Games. Once again Kranj hosted it and the best six teams from
Slovenia competed – two teams from Maribor and then one from Piran, Ajdovščina, Velenje
and Kranj. After two hours long competition with many great battles, full of tightness and
adrenalin, the most points gathered Velenje and became the new Slovenian champion of City
Games.

Spectators that fulfilled the tribunes of the open Olympic pool in Kranj could watch the
competition with six different games – wine, tourist rescuing, barrel race, water basket, flying
water polo and paddle. Equality of the favorites, Štajerske vijolice from Maribor and Velenje,
already showed in the first game wine. After three and a half minutes of carrying and
squeezing the grapes, the measuring device showed exact amount of squeezed wine – 5,2
liters. The next game was flying water polo where we witnessed the absolute record of this
year´s City Games. Štajerske vijolice won incredible 455 points, playing the game almost
perfect (no other team reached more than 300 points), took the first position and holding it
until the last game. The domination of Štajerske vijolice continued in the third game where
girls from Maribor overpowered other competition in barrel race.

After half of the competition Velenje was 10 points behind Maribor and everybody believed
there is almost no chance Maribor will not take gold in the end. But Velenje then won in next
two games. Firstly, they rescued their tourist in 1:51 which was the fastest and secondly, they
were the best in water basket and the battle for the first place was once again open. The
difference between first two teams was just 2 points and it was clear that paddle will decide
Slovenian champion.

Mini tournament in the paddle brought to the final two leading teams Štajerske vijolice and
Velenje. As the whole competition, even this final paddling was extremely tie. The better start
made Maribor but broke only few centimeters before the end, when Velenje paddled stronger
and took the win and with only one point lead also the title of Slovenian champion. 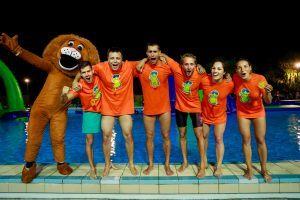 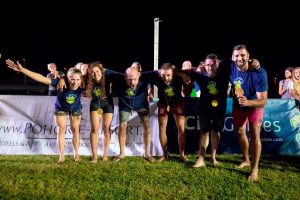