It was the third year in a row City Games came to Ajdovščina with help of Občina
Ajdovščina, Zavod za šport Občine Ajdovščina and Adria events agency and fulfilled the
tribunes of swimming pool complex. In front of more than 1000 spectators the tightest battle
this year ended with a big win of the home team. With the final result 9:8 Ajdovščina, where
local athletes were gathered together, took gold medal and the ticket for the Slovenian final
which will be held on Friday in Kranj.

As the host city wanted, only two local teams competed in the event and it turned out as a
great idea. Beside Ajdovščina there were also Nova Gorica which also gathered strong team
with local athletes. They competed in eight different games (which is this year´s record) –
wine, flying water polo, barrel race, donkey race, tourist rescuing, fisherman´s crates, water
basket and paddle.

It was very tight competition until the very end. Teams changed the leading position twice
and were tie even three times. Better opening was made by away team – girls made 5,1 liters
of wine and got their team into the lead. The great support of the audience helped the home
team to make impressive 200 points in flying water polo and won 2 points. The girls came out
then, competing in barrel race where Nova Gorica were better. The next game, donkey race,
was once again very amusing for the spectators. The track was the longest this year and home
donkey was obedient enough to bring another 2 points to Ajdovščina and the teams were tie
again.

In the next three games Nova Gorica won two of them, so the result before the last game was
8:6 for the Nova Gorica. The last one was paddle where teams gave their hearts out. For the
great pleasure of spectators home team was stronger and won three points, gold medal and the
ticket for the Slovenian final.

Slovenian part of City Games tour will end this Friday in Kranj, where 6 best Slovenian teams
will compete for the title of Slovenian champion of 2018. 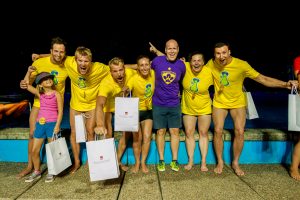 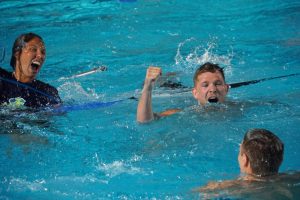