Koper hosted the first Slovenian challenger of City Games in this year. The competition was
held in Olympic pool in Žusterna and there were four teams, fighting for one ticket that leads
to national final, – Koper, Piran, Portorož and Lucija. After more than two hours long and
very interesting fight in front of crowd of people the gold took Piran, who won 34 points and
qualify for the Slovenian final in Kranj on 17. August.

Well-experienced team Piran – some of the members has participated on City Games for
many years – answered the question about the winner already after fourth game. They came
first in flying water polo, water alka, tourist rescuing and prosciutto and practically won the
competition and the first ticket for Slovenian final. We have to mention their impressive result
in flying water polo where they made astonishing 360 points.

Home team Koper ended with a silver medal around their neck after very good results in all of
the games except of water alka. They unfortunately didn´t receive points in that game, but
they made it up in the last game paddle, being the strongest and totally heated up the crowd.

It was very intense in the battle for the third place until the very last game between the team
of Morske klobase from Portorož and team Obala je zakon from Lucija. At the end the bronze
took team Lucija with 10 points.

City Games was organized with a big thanks to MO Koper, which once again showed how
amazing host they are and how amazing conditions for sport events they possess.

City Games tour is already moving to Vrbas, Serbia, where the first Serbian challenger will
take place on Wednesday. 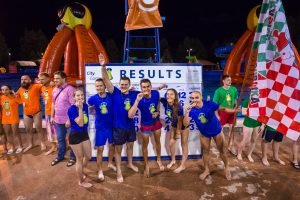 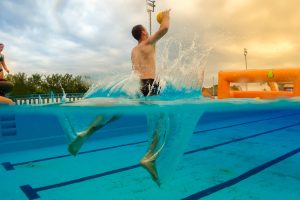