Macedonia will be represented by experienced team from Skopje. They competed in 2014 for the first time in international final and finished as fifth. The next year third place in the international semi-final was good enough to enter the final and Skopje finished there on 5th position. This year in Biograd Macedonia team will be even stronger and their goal is to enter the final.

Skopje will bring professional athletes in City Games. Girls in the team know how to deal with a ball – two of them are handball players and one is football player. Maja, the girl that easily scores goals with head in flying water polo, won the bronze medal in world championship in Footballtennis together with the captain of the team, Petar. Petar is professional gymnast that competed in European and World championships, while every other competitors were the best in their sport in Macedonia and they were also a part of international competitions (swimming, judo, kayak, crossfit).

˝We expect very good and challenging competition in the semi-final, but we hope to enter the final. This will be our fourth performance on City Games, so we have some experience now. All of our participator are the best in the sport they train so it is normal we go for win this year,˝ said captain of the team. Skopje will compete in the second semi-final with Slovenia, Serbia and Hungary. 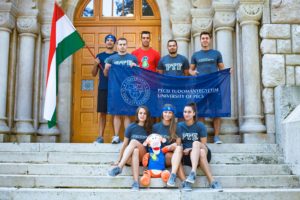