South Dalmatia got its second semi-finalist!

We’re getting closer to the semi-final for south Dalmatia. Second team that got the ticket for Baška Voda and therefore is one step closer to the international final in Biograd is Plina Istočna!

Yesterday we saw 6 great teams fighting for this title: winning team Plina Istočna, second-placed Velika Riva Doli, Trstika Trsteno, Majkovi, Zaton Water Sport and Gulaši Ston. They competed in flying water polo, tourist rescuing, prosciutto, water basket, barel race and paddle (one of the teams even managed to break one – they were so anxious to win!).

Among the members of winning team we found Croatian MMA fighter Duje Penić, who briefly said he’s much more relaxed than in a ring, but still – he doesn’t like to lose. Ok, we got it!

Prior to these senior teams, we enjoyed watching youngsters compete in three disciplines: water basket, bag race and tug of war, also known as rope. They all gave their best, but in the end Grupa won over Zatonska družina. 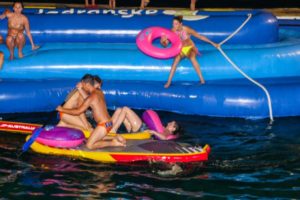 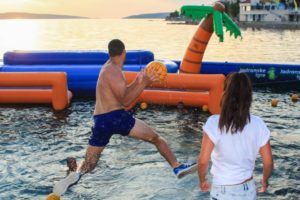