Our fourth Croatian qualifying event was a proper fiery showdown.

Experienced “Vlahov breg” team from Matulji has a new victory under its belt. Winners of first City Games in 2010. have been undefeated in the tug of war game ever since, and they are still not ready to let that title go, although we can’t say “OFC Opatija” didn’t try their best. We saw great performance by Rijeka’s “Reful” team, who also played in Lovran in between their trips to football matches on Euro 2016 in France, where they support Croatian national team. “LMF Lovran” and “POM-F-RI” teams received the most applause from the audience due to their solidarity and fair play.

They competed in water basket, fisherman’s crates, tug of war (also knows as rope) and always hillarious donkey race, in which the players almost ended up in the sea along with the judges for several times. We also saw several junior teams competing: “Kršni momci”, “Mladi i debeli” and winning “Super cure” team, which were super as the name says.

Older residents of Lovran, who still remember “Adriatic meetings” back in 1971, when Lovran reached the finals, compared those games with these ones now. Back then players have also worn fishing crates, climbed for ham and tug of war was favourite game as well. Some things changed, but the spirit of games remained the same and that’s the most important thing.

The winning team from Lovran will compete in Croatian semi-final in Novalja early August and maybe will go even further to the finale taking place in Malinska. As for us, we briefly concluded the first Croatian part of City Games 2016 tour. We are now heading for Serbia! 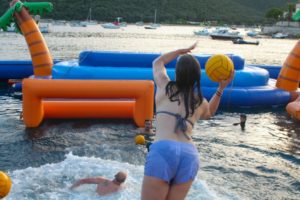 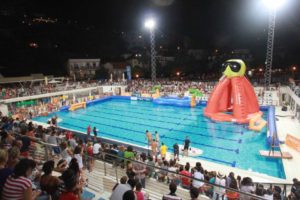