Five teams from the Republic of Montenegro participated the competition with goal to take their place for finals that will be held on august 24th in Budva.

More than 400 spectators and fans with presence of National RTCG television, that will weekly report from games and provide live broadcast from finals in Budva, enjoyed this unique combination of sport and fun.

Teams competed in five games that were a mix of tradition and a modern City Games like Wine and Prosciuto as well as attractive Water Basketball, Flying Waterpolo and the queen of City Games – The Paddle.

Furious start of the team Barely gathered in the first game Wino, followed by second Tarzan team implied high physical readiness but also a great team work that is essential for this game.
In second and third game, Flying waterpolo and Prosciutto Tarzan team dominated and took the lead scoring most points, as well as in the fourth game, the game requesting both physical strength and concertation – water basketball. With almost double more points than other teams in the end, team Tarzan was crowned as the king of the City Games in Kotor pool.

Although domination of Tarzan team was obvious, spectators enjoyed beautiful summer night in Kotor marked by great performance, music, cheering, but mostly by enjoying in sports and programme that managed to connect tradition, fun and competitors skills. 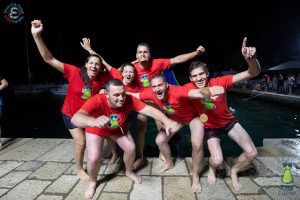 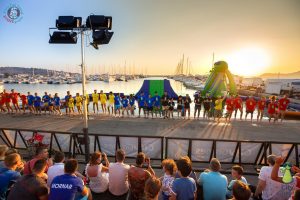