Subotica won on their home ground, tonight half-final of City Games in Sombor

City Games tour has last night stopped in Subotica, where another qualifications for today´s
semi-final in Sombor was organized. There were 4 teams from 4 different places competed on
city pool ´Dudova šuma´ – all of them with one goal – to qualify for the semi-final. Bečej,
Sombor, Inđija and Subotica were competing and the most successful in this adrenalin games
were Subotica. The second place won Sombor, since bronze medal went to Bečej which has
the youngest team on this year´s competition. The less lucky was Inđija that came as fourth
but the team was not sad at all since the entertainment in Subotica was just too good.

The great atmosphere, fair play and team spirit drove away the bad weather that collected
above Subotica, but it didn´t have a chance to spoil the party for all generations. Spectators –
young and old one cheered for their teams and expectedly the most support came for home
team which won the competition in the end.

“We are ready for the half-final. We´ve heard that Kikinda is very good team but we will give
our best to win and to get the ticket for the national final for Zlatibor,” was well determined
the captain of Subotica.

Every team that qualified for the semi-final was practicing really hard and each one of them
expect to win and represent their city in the final in Zlatibor on 22. July. The thing is that only
two of them will succeed so we are expecting a great battle between teams tonight at 7.30
p.m. on city pool Štrand in Sombor. You can´t miss this spectacle! 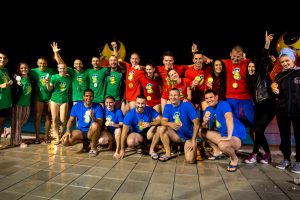 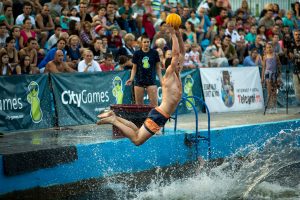 SOMBOR 10.07.2018: OUR FIRST FINALISTS OF CITY GAMES ARE KIKINDA AND SUBOTICA