From the island Čiovo City Games tour moved to island Pag. Metajna, beautiful little village
near Novalja, hosted the third Croatian challenger where we got the fourth finalist. The most
points after five games that were played last night gathered Šubićevac from Šibenik. With this
result they achieved the ticket for the final and will be a part of the best Croatian teams that
will compete at the end of August in Vir.

More than 1000 spectators were delighted to cheer for seven great teams from Šibenik, Krk,
Mali Lošinj, Dubrovačko primorje, Metajna and Pag. The atmosphere were very relaxed and
teams were playing five different games – tourist rescuing, prosciutto, donkey race, water
basket and paddle. The organizers of the competition, Grad Novalja and Adria Events agency,
were forced to cut off flying water polo due to safety reasons. Shallow water was too risky for
fast and attractive game.

In the first game the home team Metajna rescued their ladies the fastest and heated up the
atmosphere. In prosciutto the best swimming and climbing abilities showed Daj Mare from
Krk. He reached prosciutto in only 22 seconds and brought maximum points to his team in
this game. The next game was the most interesting for the spectators and even result is always
unpredictable. Donkey from Jazavci from Mali Lošinj was the most obedient and ended first
with result 24 seconds. Water basket and paddle was won by Krk which was at the end
enough for the second place. The gold was won by Šibenik which succeed something that is
not very common. They didn´t win in any game, but were the second and third in all of them
which was seen for the first in City Games.

City Games tour continue today on the beach Banj in Šibenik where qualification will be
played. The competition will start at 7.30 p.m. and the entrance will be for free. 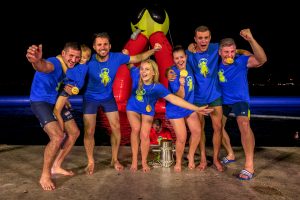 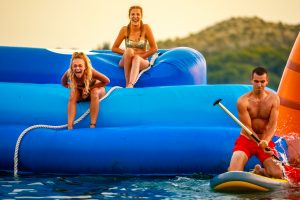 ŠIBENIK 07.08.2018: ŠUBIĆEVAC CONFIRMED THE GOOD SHAPE BEFORE THE FINAL