The fifth season of City Games in Montenegro was successfully opened in Kotor. The full
tribunes of the open pool of VK Primorac witnessed the two hours competition between teams
Vikingi, Seamont, Leteći šugamani, Božo pumpa – all from Kotor and Triatlonci from Herceg
Novi. Brave teams, collected by two women and four men competed in traditionally City
Games games – flying water polo, tourist rescuing, barrel race, prosciutto, water basket and
paddle. After great battle between teams the most successful was the team Triatlonci from
Herceg Novi which made it to the Montenegro final, which will be held on 31. July in
Podgorica.

The best opening into the competition has made team Leteći šugamani, creating 53 points in
the first game and taking the lead. The second game tourist rescuing already changed the
leading position – rescuer from Triatlonci saved his ladies the fastest and brought his team at
the first position. And they didn´t lose it until the end of the competition.

The special tension got prosciutto where three teams swam and climb up for the prosciutto
within only one second. Competitor from Vikingi won a time 29.86 seconds, from Triatlonci
29.44 and the fastest was the competitor from Seamont, completing his task in 28.94 and
woke up hope for attacking the first position. Their hopes ended as first semifinal in paddle
was played – Triatlonci beat them and finally confirmed their ticket for the final.

City Games in Kotor was organized by Opština Kotor, Turistička organizacija Opštine Kotor
and Adria events agency. The tour is now traveling to Budva where this Thursday the second
Montenegro challenger will take place and for the next final ticket will compete another 6
teams. 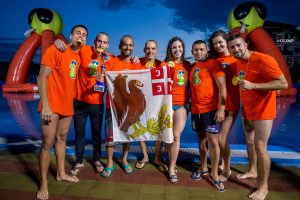 ZLATIBOR 22.07.2018: KRAGUJEVAC AGAIN THE CHAMPION OF CITY GAMES IN SERBIA 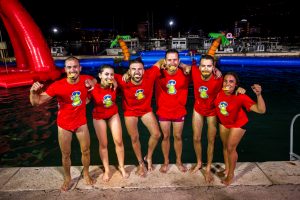