The popular City Games, sport and entertainment event, is just about to start the fresh new season – already the 9th one. Unusual and traditional challenges, team work, lots of adrenalin and mostly unforgettable moments and happiness is just some parts of the City Games that you don´t want to miss. City Games is bringing many new things in this season and give you an extra reason to be a part of it.

The big change of competition format is that national champions from 2018 and 2019 will qualify for the big international final, which will be held in Luxembourg in year 2020. The great spectacle will be covered into six TV shows and broadcasted to several European countries. The participation teams will come from 16 different countries which will raise City Games to the level of famous TV game show “Jeux Sans Frontières” (Games Without Borders).

Besides big format change City Games is also preparing many novelties. One of the most important one is the number of the players in a team which will decrease on 6 players – at least 2 of them have to be women. The most spectacular change which will be presented through this season, especially for those who are regular part of City Games for years, is the very new and refreshing scenography. It will lead us to transformation of the existing games and even bring to us completely new one. Let the rest remain secret, waiting for you to reveal it!

The tour will start in the country of its origin – Croatia. Ðakovo will have the honour to host the opening event of the season – Croatian challenger which will take place on 15th June.

Tour will then turn into Slovenia and their beautiful Koper – the first Slovenian challenger will be held on 22th June.

For more information about event schedule please check our website www.city-games.com and stick to it – the calendar is not complete yet and there is a lot to come! 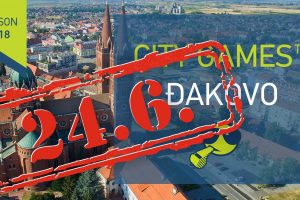