Organized by Municipality of Vrbas and sport clubs on CFK Drago Jovović in Vrbas, last challenger of City games were held. Teams from Sombor, Ruma, Osečina, Čačak and two teams from Vrbas gave their best but also shown team spirit in attempt to bring their teams to finals.

In six games: Wine, Water alca, Barrel race, water basketball and paddle teams competed trying to win as much points as they could for their teams.

Team Sombor won most points in 4 games and was a leader:

“We can’t wait semi-finals in our city in front of our supporters. We will give our best” said the captain of Sombor team.

Home team Vrbas was great in barrel race in which they won 8 points:

“That was our game, girls performed great. We are proud of them. We are sorry that we didn’t do better but we will prepare for the next year.” out the captain of home team pointed out.

Second place went to Osečina team that qualified for semi-finals because team Sombor did that in last challenger in Inđija.

“We are very happy. We came wanting to win any medal. Now we have both the medal and place in semi-finals.” said captain of Osečina team.

“I don’t know what happened in the third game when we scored 0 points. But we have shown agility in Paddle game and that brought us back. It was a great experience to participate and we are bringing great memories from Vrbas.” Captain of Ruma team said.

Team Čačak was fourth, fifth and sixth place went to two home teams. Games were held on two pools and the atmosphere was great. City games team will cherish their Vrbas memories and continues its tour in Sombor where Vojvodina semi-finals will be held. 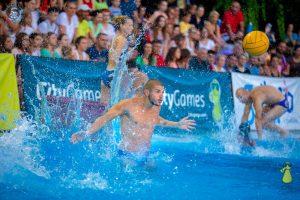