Since the beginning of time paddling was vital discipline to master for traveling and fishing on sea, lakes or rivers. In the “Paddle” game, competitors are fighting to pull the rival team thus proving their superiority. Strength, team spirit and synchronised movements are distinguishing the winners in this game. The physically strenuous and demanding game unleashes the competitive spirit among competitors which is best manifested through the players’ emotions during this game. 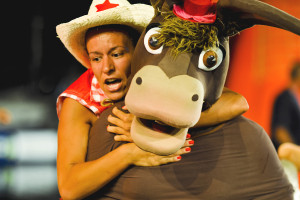