Stands on SC Copacabana were completely filled with spectators that watched premiere edition in Osijek. Organizers: The City of Osijek, Osi-jek Tourist Board and Adria Events Agency together put a lot effort to present City Games spirit to spectators and to force teams to give their best.
Motivated by fans and wish to win a gold medal teams showed their tal-ents and hours they spent training for the competition
Members of participating teams were successful athletes: rowers, swim-mers, triathletes etc. They all competed in modern version of traditional sport games in which more than strength, skills and stamina was needed, team spirit and resourcefulness to handle new situation were needed.
Six teams from Mali Lošinj, Krk, Valpovo, Sisak, Đakovo and Osijek competed in six games: Wine, flying water-polo, Barrel race, Tourist res-cuing, Water basketball and Paddle.
Home team was putting a great fight against experienced teams from Mali Lošinj, current and multiple champions from Krk. In very tight com-petition, teams have to put their best to win a place in finals that will be held in Vir on August 20th.
Game of Paddle was again a decisive one, water version of rope pulling where teams rowing try to pull other team.
Team Osijek, second placed before paddle game, missed its chance in semi-finals an then in third place battle winning only six points, while teams from Mali Lošinj and Krk won 12 and 15 points.

Despite loud support from stands place in finals was won only by team from Krk. After medal ceremony bronze winners team from Osijek and their supporters celebrated after pleasant surprise from organizers – a wild card invitation to finals in Vir.
Beautiful night in Copacabana will be talked about for days from people that competed or supported their teams and Osijek has once more shown to be a city of sport and sport lovers and that we will have an op-portunity to enjoy more editions of Osijek City Games. 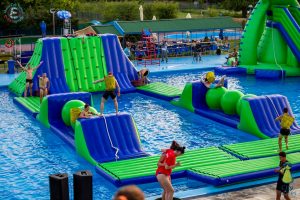