Dark, cloudy sky and really strong wind didn’t stop us from having fun!

So yesterday we came to Slatine on the island of Čiovo and decided bad weather wont stop us from playing. Local team Trogir was confronted by Norwegian crew, who were quite in the mood – although they played these games for the first time, they managed to win! That’s not all: they were so cool, they passed the local team into the semi-final!

Teams played treasure hunt, flying water polo, water basket, bag race and tug war. As we said, Norwegians played these games for the first time, but they won in all except tug of war and treasure hunt. Besides winning the gold medal, they also won everyone’s sympathy with passing the local crew into the semi-final.

Prior to all this, we saw three great junior teams competing in bag race, tug of war, puzzles and carrots. Slatinski redikuli, made of just girls, won this competition and they were really excited about it!

Our next stop: Brela! 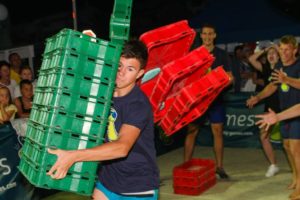 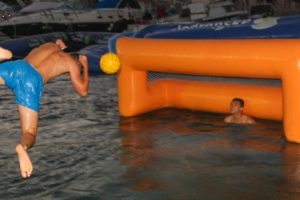